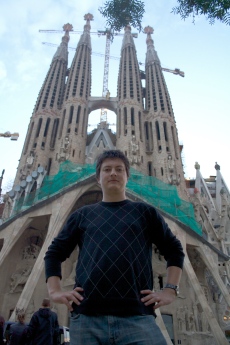 Masterpieces take a really long time to perfect (so I’ve been told). When I visited Gaudi’s Sagrada Familia Basilica in Barcelona, it astounded me that building and construction, including extra architectural and engineering work, had been ongoing since 1882, and by 2010 was only halfway through. Even smaller scale masterpieces take a long time. The process whereby Monet painted The Japanese Footbridge took several years: he built the bridge, planted the water lilies, and then finally put brush to canvas. Bruce Springsteen took a whole year in the studio for the album Born to Run (plus six months editing the lyrics to the title track).

A consequence of being in relationship with Jesus is that God takes us like a sketch of an artwork, and slowly brings us to perfection. The Apostle Paul wrote, “For we are God’s handiwork, created in Christ Jesus to do good works, which God prepared in advance for us to do”  (Ephesians 2:10).  The Greek word for “handiwork” is ποιεμα (poiema), which translates to “work of art, masterpiece, artefact, or poem.” I love the idea that we are God’s masterpiece – his work of art – his poem. The Melbourne biblical scholar Leon Morris aptly stated God’s creative act: “Salvation is creation, recreation, new creation.”

Realising that we are God’s masterpiece helps us to understand some of the pain and suffering of life. A masterpiece is worked on and worked on, refined, and fine tuned. Some aspects are discarded to push the work closer to perfection.  C.S. Lewis discussed the implications of this in The Problem of Pain:

We are, not metaphorically but in very truth, a Divine work of art, something that God is making, and therefore something with which He will not be satisfied until it has a certain character.  Here again we come up against what I have called the “intolerable compliment.” Over a sketch made idly to amuse a child, an artist may not take much trouble: he may be content to let it go even though it is not exactly as he meant it to be. But over the great picture of his life-the work which he loves, though in a different fashion, as intensely as a man loves a woman or a mother a child-he will take endless trouble-and would doubtless, thereby give endless trouble to the picture if it were sentient.  One can imagine a sentient picture, after being rubbed and scraped and recommended for the tenth time, wishing that it were only a thumbnail sketch whose making was over in a minute. In the same way, it is natural for us to wish that God had designed for us a less glorious and less arduous destiny; but then we are wishing not for more but for less.

Know that God is working on you everyday. He is editing the lyrics of your life; He is blending the colours on your canvas; He is chipping away at your stonework.  And this will continue until the end of your life. As you experience these changes, even if they are painful, be inspired by The Divine Artist who is perfecting you into His masterpiece.